The mobile revolution has taken online gaming to the next level. Research shows that nowadays, smartphones are the most popular gadget for playing games of chance, with more than 50% of people preferring it over computers and other devices.

However, not every iGaming genre has had an easy transition to touchscreens. Roulette has been a problem area for many players and developers, which is why we decided to make this review. Here, we’ll explain why mobile Roulette can cause difficulties and recommend both live & RNG versions that should be easy for anyone to pick up and play.

Most slots and card games rarely have more than 5-6 buttons. In comparison, roulette seems like a nightmare. Not only does it have 37 zones for each number on the wheel, but you can also place chips below and between these areas for the various inside bets. Additionally, there are outside wagers, a supplementary racing track area, statistics, plus all the icons for chip selection, resetting your bets, and so on. That’s a lot of stuff to fit on your average 6-inch display.

Still, there is a solution to all of this — clever design. In other words, you need to find a mobile roulette casino with modern games from developers with a “mobile-first” approach. Another great tip is to find a top live dealer studio, as they frequently enhance the interface of their streams. To save you some time, below we’ve listed our recommendations for this year. 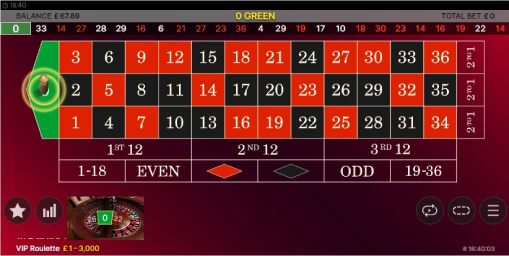 It’s hardly surprising to find the top live dealer studio offering the best mobile adaptation of roulette. Evolution’s lobby is full of American roulette, French roulette, and European roulette variants with or without dealers plus various unusual versions that boast payouts of up to 1,300:1. What they all share in common is a virtual overlay that makes it easy to play live roulette. Mobile players will see the layout stretched across their entire screen.

You can place the more difficult inside bets by tapping and holding on your screen. The affected numbers will be highlighted, so you only need to release your thumb once you’re satisfied with your wager. What’s cool is that you can also save custom combinations that are accessible through the “star” button.

The video feed is in the lower-left corner of the display. It’s possible to enlarge the window or even go in full-screen mode to watch the ball spin. Additionally, you have buttons that will show the statistics screen and racetrack area. You can even enable autoplay, which is super useful on any roulette for mobile phone users. The betting limits are wide enough for most users, but keep in mind that they’re set by individual gaming sites. Evolution’s lobby can be found in almost any casino in the UK, EU, or Canada, but if you need tips, check out the 3 operators on our table.

If you want all the convenience of Evolution’s live tables in an RNG format, European Roulette Pro will surely deliver. This title is made by Play’n GO, a developer that specializes in games for phones and tablets. This release packs many of the features we discussed above, plus a few extra goodies that make it easy to play roulette on mobile phones.

The layout is slightly smaller, but only to accommodate a special widget that displays the bet type, involved numbers, and payout, which is quite useful. Still, you might not like the small lettering if your eyesight isn’t the best. On the bright side, the playing chips and spin, double, and undo buttons are big and positioned at each end of the screen.

When the round begins, the roulette wheel appears at the center, so you won’t have any trouble seeing the pocket in which the ball lands. This title does have a few shortcomings. Namely, auto-play isn’t enabled, and the betting limits are somewhat narrow at $1-$100. However, you can play with fast mode, which dramatically reduces the time between rounds.

Lastly, we’ll review Playtech’s most exciting live version of roulette for mobile phones. Quantum Roulette is brimming with functionalities, but what exactly is it? You can consider it an augmented European version intended for fans of the straight-up bet.

Each round, 1 to 5 random numbers will receive a multiplier between x50 and x500. If the ball lands on such a number and you’ve placed a straight-up wager on it, you’ll receive a tremendous reward. The catch is that regular straight-up wins have reduced payouts (from 35:1 to 29:1) to compensate for these multipliers. In other words, the 97.3% RTP of the Euro variant is also observed in this mobile roulette.

Some of its most standout functionalities include a detailed statistics screen in addition to on-layout stats, custom bets, autoplay, a bar that shows you what percentage of the table is covered by your bets, and more.